Williams Interactive, also known as Scientific Games is a widely known online casino game provider and it indeed is one of the biggest providers by having offices in 13 cities all around the Globe. They offer dozens of games to all the online casino lovers. Did you also know, that they root all the way back to 1943 when they started to manufacture pinball machines? Their online gaming history though is fairly new dating back to 2011.

Nowadays, NYX gaming has also joined the group. The company is now called SG Digital. Find below the best WMS casinos. Bonus offers are for new players only. Terms and conditions apply. Gambing is for adults +18 years only!

The business was established in Nevada, USA. As mentioned before they started by making pinball machines. As we all know, those became a huge success. Or who does not have a pinball memory with friends?

But as the time kept moving on, so did WMS by starting to create arcade video games in the 70´s. That lead to some very successful games such as Robotron: 2084 and Defender. At this time they were owned by the Seeburg Corp.

In the 90´s they created their first slot machine game and unfortunately, in 1999 they stopped manufacturing the pinball machines.

The man behind WMS is called Harry Williams, who was actually an engineer and on top of pinball machines, he actually created a fortune telling machine too. But eventually pinball machines became their main product. at first, during the WW2 it was harder to create due to the lack of materials, but after the war, they were able to create the machine themselves. In the 60´s they were rising to the fame by selling thousands of pinball machines yearly. This may not sound a lot to many, but the numbers always used to be smaller back in the day.

Then in the 70´s WMS took the next turn by starting to develop arcade games with Magnavox.

Even though they were going with the flow of arcade games, they did not forget pinball games. They were actually the leading pinball manufacturer even after the pinball´s golden times were over.

But then in the 90´s they decided to fully focus on gambling machines. In 1996 they created their first successful slot called Reel ´em in. WMS was actually the business to pull the industry from mechanical machines towards video games, which can be thought as a huge jump for the gambling industry. And was also the first step for slots towards online. In 1996 they shut the pinball manufacturing. It was an end of an era.

In 2001 they started their “participation” slot series, which still were in land-based casinos. These slots were even connected to each other, so the players were able to compete against each other in the jackpots. Some slots that were taking were “Clint Eastwood”, “Men In Black”, “Dukes of Hazzard” and many more. It was clear, that by this time WMS was the slot giant in the USA. In 2012 their revenue reached $690 million.

in 2010 WMS finally moved online by starting to offer online video slots in the UK. As for them and for everyone the USA is still a closed market, it was essential for them to move to Europe to continue with their business. Even still in the USA, they are manufacturing land-based slot machines to casinos. Did you know that they do games for Facebook too. Obviously, these games are not real money slots.

Please find a list of Williams Interactive (WMS) casinos below: 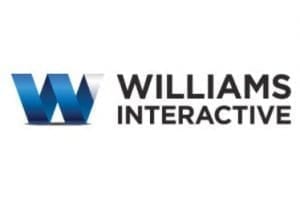 Even though Willimas Interactive is not offering many games with super high RTPs, it still has one game that stands out of the crowd. These are the top-3 games from Williams interactive when it comes to the RTP.

Invaders from the Planet Moolah 96.00%

Williams interactive offers one jackpot slot and that is called Super jackpot party.

Up to 50 extra spins
Visit Casino